skip to main | skip to sidebar

Our next contribution today comes from Robin Throne of LeClaire, IA.  Though she says that the piece is "unfinished" I think it's still quite intriguing.  Here is her "contexual statement" about the piece:

"Over the Labor Day holiday, I was in Connecticut doing research for a novel and I was struck by the context of time and place, and how essential that perspective is to our own relative sense of time within a place. As I explored the restored 17th century historic villages of Wethersfield and Glastonbury, Connecticut, I could not help but relate this context to our own historical saviors of 19th century LeClaire. People like Debbie and Gloria, guardians of the repository of local knowledge at the Buffalo Bill Museum, and city leaders and shopkeepers who were committed to restoring the historical ambiance of Antoine’s village. People like Steve and Wanda who continue to work to keep the library doors open to groups like the LeClaire Genealogical Society and information accessible to relative newcomers like me who celebrated my 10th anniversary of my home along the great river on October 15. Or Bob who catalogs our cemeteries and chronicles them on his blog and Friends of the Library who bring the past to life in their fall reenactments of the founding fathers and mothers. I am not a descendent of Parkhurst or Suiter or Tromley, families of the first homes and parks and businesses. But I have found my place in this river village (as other newcomers like Peggy would call it), or city as it would prefer to be known.

On Labor Day, when the historical societies in Connecticut were closed and I was done scoping out the cemeteries, I found myself taking a road trip from New Haven to New London to Barnstable to Plymouth to Swansea and back to Glastonbury, thinking all the while about those that had arrived on this American shore from another place and renamed their cities and towns to honor their former places even if it were a place which no one would ever return.

Each month, as the respective full moon reflects over the river (often as if choreographed with the reflecting lights of Port Byron on the Illinois side), I am reminded of time, place and the recording of time and place through poetry. As Glastonbury, Connecticut, restores 17th century homes to bed and breakfasts and posts ‘founding’ signs that read 1693, I could live in a context of believing that this place, my 10-year home, was ‘founded’ less than two centuries ago. This year’s October hunter’s moon reminded me that time and place will always be relative for the observer, and although we seem to have a need to claim it as our own within our own perception of time and place, it was here before. Perhaps then we can be reminded that in doing so, we may also honor those that had claimed it then."


The river is never the same in darkness as a swollen McCarty Creek delivers its goods
gurgling still from a sodden July, last remnants of burst tails flagging the wild grasses
like cotton batting, useless filter for crushed cigarette packaging with a one-way ticket
to the wider water tracing a refractive light path cast by a cosmic orange mirror.

Only you can walk on water and bring us to witness this abandoned bank camp
sheltering the thousand who carved out no abstracts or deeds, parcels or plats
now manicured with ornamental grasses, lattice and fence by the guardians
of four-inch grass and warring over clippings that crossed the line.

We see you rise in the comfort of our darkness, replacing the harvest before you
and illuminate the memories erased by day with hibiscus, cul-de-sacs and gazebos
to recall a feast of corn and squash and covenants signed and unsigned.

This blog is the "homepage" for THE VISIBLE CITIES poetry project, happening in the greater Quad City area throughout the fall of 2009, sponsored by the Scott County Regional Authority, Quad City Arts and the Midwest Writing Center.

The views and opinions expressed on this site in no way reflect those of the Scott County Regional Authority, Midwest Writing Center or Quad City Arts.

Public events related to THE VISIBLE CITIES poetry project. All events free & open to the public:

The dealine for submissions to the Visible Cities Poetry Project is SUNDAY, OCT. 18, 2009. You can find guidelines and the orginial prompt by clicking here.

NOTE: You DO NOT have to write on the prompt to submit, as long as your submission follows the guidelines and has something to do with the relationship between place & identity.

Everyone who submits will receive a brief response to their work, and everyone who has their work posted is invited to read at the Visible Cities Public Reading on Thursday, Oct. 22, 7:00 pm at the Midwest Writing Center (see EVENTS for details).

Email rcollins@midwestwritingcenter.org if you have questions. Thanks! 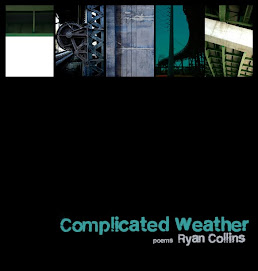 R | R | C
Quad Cities, Illinois, United States
Ryan Collins is a poet & native of the Quad Cities. He has worked as a video store clerk, literary magazine lackey/editor, political canvasser, paraprofessional, writing consultant, arts administrator, freelance writer, adjunct instructor and haberdasher. He is a member of the Midwest Writing Center's board of directors and is the director of the MWC's Young Emerging Writers Summer Internship Program. He currently lives in the Illinois Quad Cities.